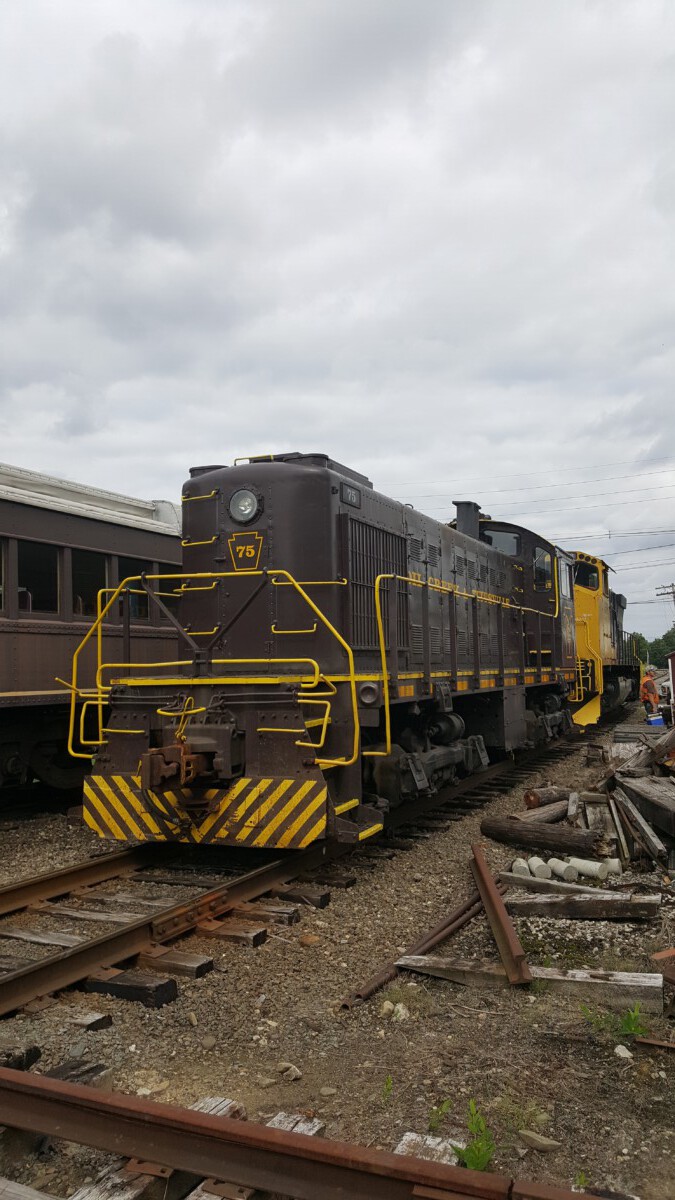 An ALCO S-2 switch engine, built in 1947 by the American Locomotive Company and on lease from the New York & Lake Erie Railroad. Weighing 112 tons, its ‘prime mover’ is a 1,000 horsepower turbo-charged diesel engine, powering a 600-volt electric generator, which in turn powers four electric traction motors, one on each axle. 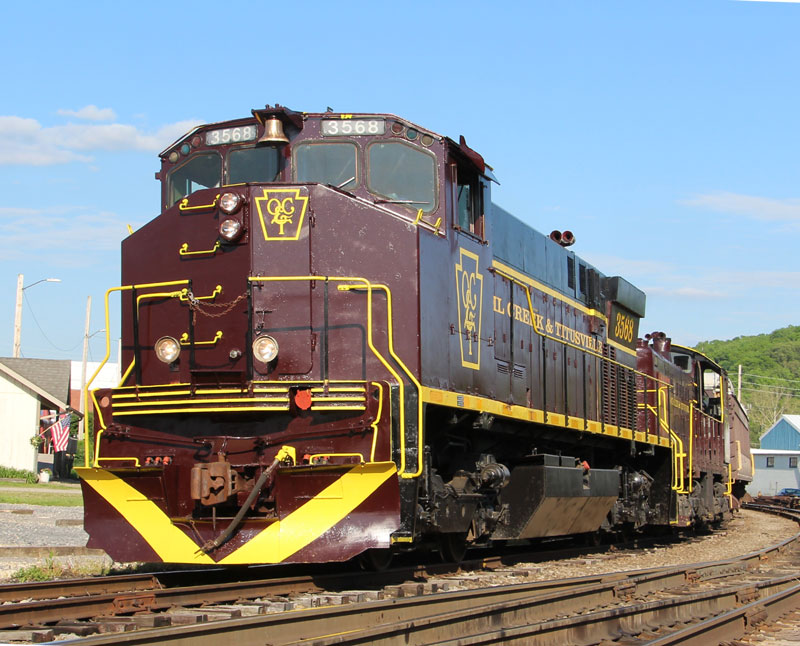 Also an ALCO S-2 switch engine, built in 1950 by the American Locomotive Company, it was purchased by the Oil Creek Railway Historical Society in 1999 and is equipped the same as our #75. 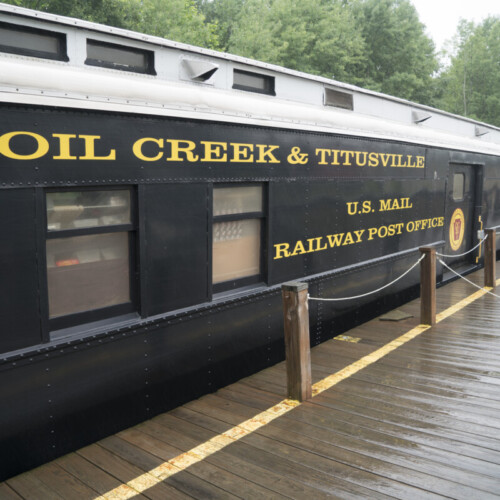 Our RPO is the only one currently operating in the United States. Built in 1927, it originally ran on the Chesapeake & Ohio Railroad as their #68. It then went to the Bangor & Aroostook as their #570 and in 1989 was donated to us by Andrew Merrilees LTD, a Canadian locomotive re-builder. When it first arrived in Titusville, it was so rusted you could see straight through it from the outside. Thanks to our volunteers, with a grant from the John Nesbit Rees and Sarah Henne Rees Charitable Foundation, it was beautifully restored. You can purchase and mail postcards, buy snacks, drinks and limited souvenirs on the RPO during your ride. We haul bikes and canoes in it and it offers a great view for those riding in wheelchairs. Our First Class car was purchased in 2005 from the Lake Shore Railway Historical Society. Built by American Car & Foundry for the Wabash Railroad in 1925, it ran as a First Class car on the famous Wabash Cannonball Special. Rebuilt with sealed windows and air conditioning in 1946, it was acquired by the Norfolk & Western Railway via merger, and continued in service until the early 1960’s when it was donated to LSRHS. The interior is original per its 1940’s rebuild, with long distance reclining Sleepy Hollow seats and luggage rack lights. 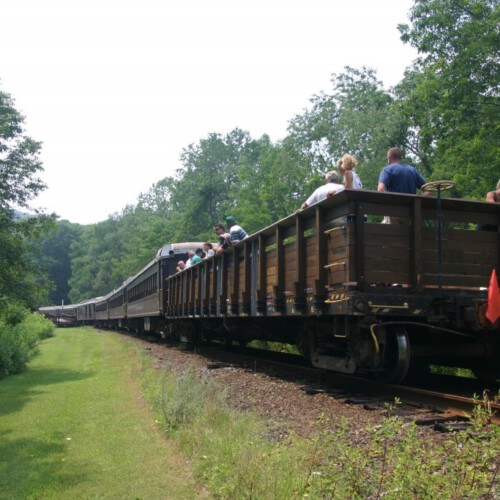 Originally an express refrigerator car c. 1940, its number refers to the date Edwin L Drake struck oil, August 27, 1859. It had been converted to a flatcar and was being used in the GE locomotive works in Erie, PA, to move locomotive frames around the plant. GE’s East Erie Commercial Railroad gave it to us in 1990. We promptly put in a new floor and oak sides. In good weather, up to 100 passengers can be found viewing the beautiful scenery and searching for bald eagles and other wildlife in the Oil Creek State Park from our gondola car. 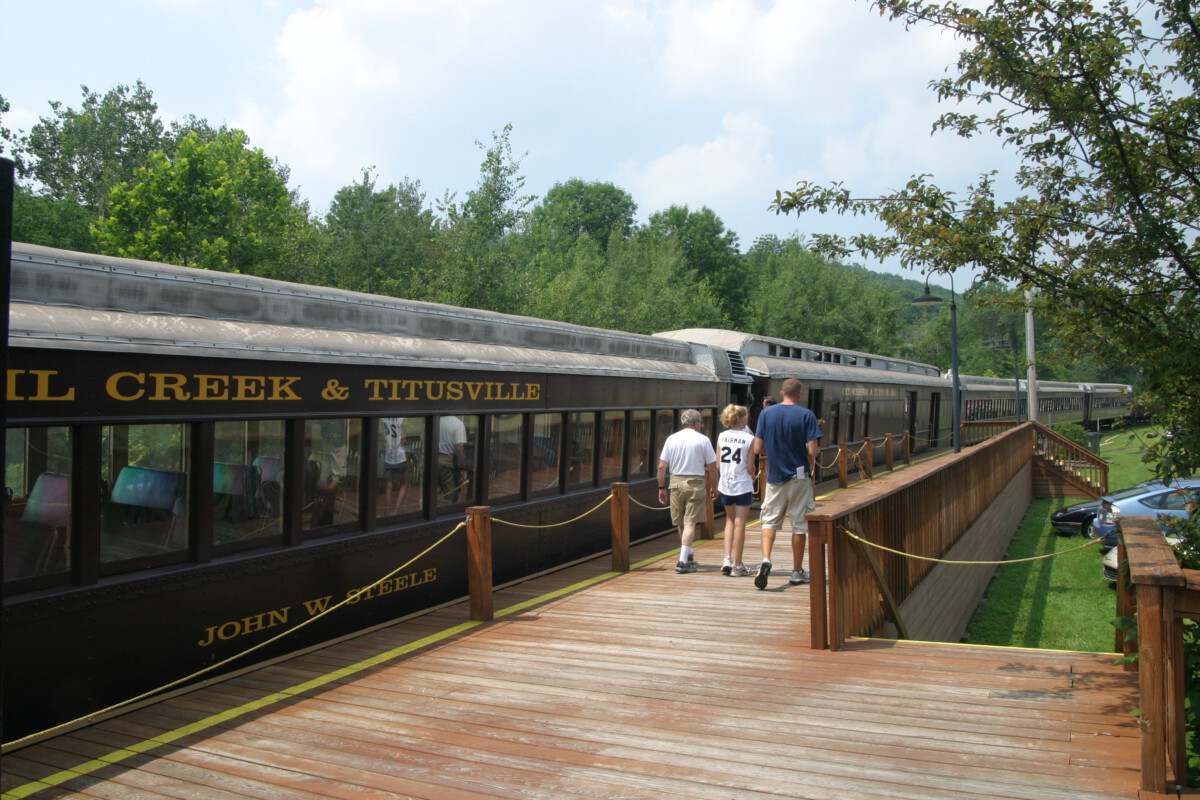 Built by Pullman in 1930 as electric-powered commuter cars for the Lackawanna Railroad, these cars were used around Hoboken, NJ, until 1986. They are solid steel, with the only wood being window sills and mahogany arm rests. Their electrical systems have been completely redone to modern standards. The concrete floors maintain a low center of gravity for safety. The ‘walkover’ seats allow passengers to always face forward, or sit in groups of four. We have completely refurbished their interiors. Two (#59 and #61) have 20-KW generators to provide power to our train. The number and name of each coach are keyed to significant people in the history of the ‘valley that changed the world.’

Brought in the first commercially successful oil well on August 27, 1859.

Became the first oil millionaire from developing Rynd Farm in 1860.

Drilled the first of the ‘third sand’ gushers across from Pioneer Run in 1861.

Began the construction of the Oil Creek Railroad from Corry, PA, in 1862.

President of the Central Oil Company which owned and developed Petroleum Centre in 1863.

The famous “Coal Oil Johnny” who inherited the McClintock oil fortune in 1864 and frittered it away.

Built the first oil pipeline from Pithole to Miller Farm in 1865. 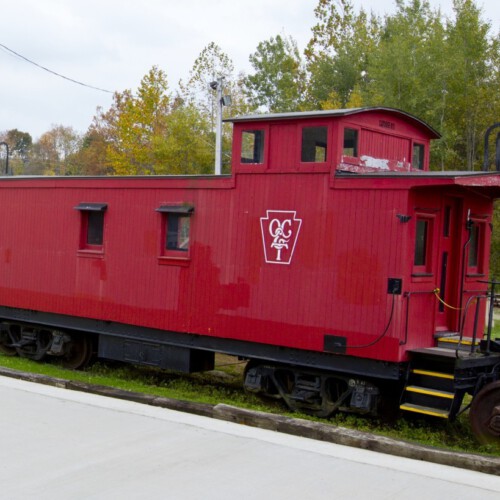 Built in 1913 for the Elgin, Joliet and Eastern Railroad, it served as the executive car for the Lake Erie, Franklin and Clarion Railroad. Dr Kevin Moore, a Clarion dentist, bought it and moved it on to the OC&T. 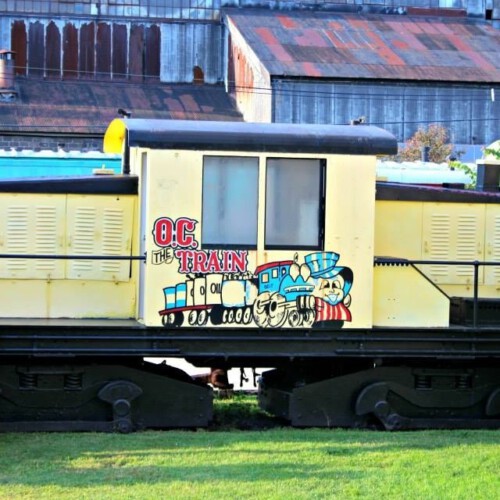 The little engine at Perry Street Station is a 50 ton Atlas industrial switch built in 1946. It ran for Cytemp Specialty Steel Company in Titusville as was given to us by Ric Tritsch. Now stationary at Perry Street, it’s great for taking photographs of your kids.